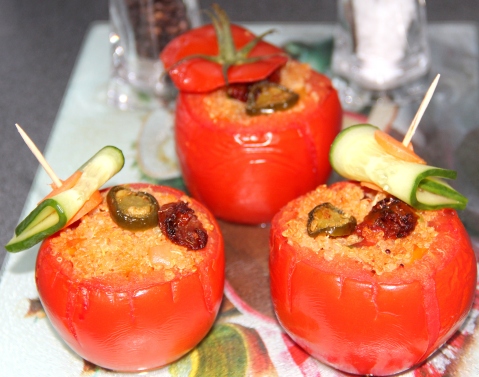 This Dairy free recipe contains Ripe juicy tomatoes are hollowed out and filled with quinoa stir fried veggies. Quinoa is sauted with stir fried veggies and sauces; Stuffing can be personalised as per the taste.

Tomatoes act as an excellent source of the strong antioxidant, vitamin C, potassium and choline content in the tomatoes all support heart health.

Fried rice using quinoa instead of rice as its high in protein and fantastic wheat-free alternative. Quinoa is a tiny grain that cooks up like rice and has nutty flavour and light, fluffy, texture similar to couscous.

This makes a fantastic vegetarian main course as it is stuffed with quinoa.

My passion for Cooking & love to explore healthy recipes. This blog is a result from it and am here to share 'Recipes for Healthy living'...Its all about 'FOOD and HEALTH'
View all posts by Chitra Jagadish »