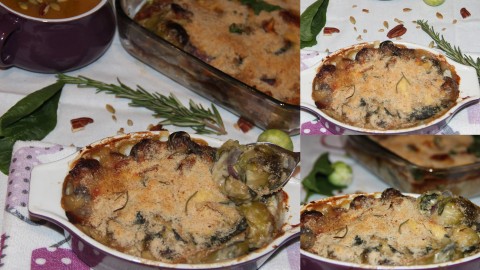 A cozy little casserole filled with roasted brussel sprouts, a thick and creamy sauce and tons of crispy, crunchy homemade croutons. It’s everything I love in this world rolled up into one perfect dish.

Brussels sprouts are very high in fiber, and they belong to the disease-fighting cabbage family. Indeed, they look like miniature cabbages. Brussels sprouts are also particularly rich in vitamin C, another anti-cancer agent. You will be getting a good-for-the-body food that is high in protein and low in fat and calories.

I am bringing this recipe to Angie’s FF#46

My passion for Cooking & love to explore healthy recipes. This blog is a result from it and am here to share 'Recipes for Healthy living'...Its all about 'FOOD and HEALTH'
View all posts by Chitra Jagadish »